Time It's Not A Crime Event - Women's Equality 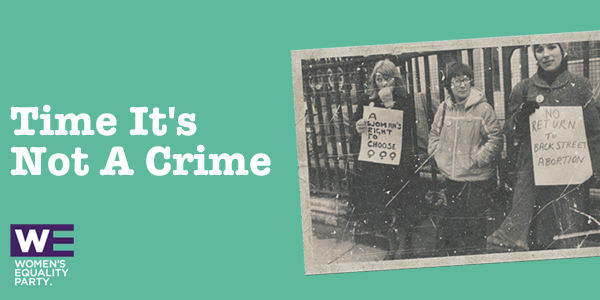 Half a century ago, women in the UK were begrudgingly given the right to have a legal abortion, providing certain medical criteria were met.

Today, the same law is on the statute books and despite the world moving on, the situation for women has not changed. We are still patronised and potentially criminalised by a system that does not trust us to have control over our bodies. Across the Irish sea, women in Northern Ireland and Ireland cannot legally obtain a safe abortion, even in cases of rape or fatal foetal abnormality.

Enough is enough. 50 years after the abortion act and 153 years since abortion entered criminal law, and we’re taking a stand.

Join us and leading figures in the fight for reproductive rights from both the UK and Ireland, past and present, and together we will light the way forward in 2018.

As Leader of the Women's Equality Party, Sophie has been pushing women's rights to top of the UK political agenda for the last two years. She has grown the party into a grassroots movement with thousands of members and registered supporters and some 70 branches in Scotland, England, Wales and Northern Ireland.

Emma has worked to bring the abortion conversation into the mainstream in Northern Ireland through creative and social media projects, as well as through public engagement. Emma has also recruited for and volunteered as a clinic escort for women accessing services at Marie Stopes Belfast.

Barbara Davidson is a member of the London-Irish Abortion Rights Campaign. She is originally from Northern Ireland and is a former solicitor. The London Irish Abortion Rights Campaign is a grassroots organisation of over 1000 members living in or around London which calls for the repeal of the 8th amendment from the Irish constitution and campaigns for access to free, safe, legal abortion in Ireland and Northern Ireland.

Dilys Cossey, leading campaigner on reproductive rights since the 1960's.

Dilys Cossey was secretary of the Abortion Law Reform Association from 1964-68, a member of the team which worked to reform the abortion law.  For the rest of her working life she remained active in the reproductive health, family planning and population field and played leading roles in campaigns for free NHS contraception, defence of the 1967 Abortion Act, promotion of embryo research, in establishment of the all-party Parliamentary  group on population, development  and reproductive health and the European Parliamentary Forum on population and development.

The Venue is fully accessible