Build Back Equal: emotion and empowerment at Conference 2020 - Women's Equality

Build Back Equal: emotion and empowerment at Conference

Build Back Equal: emotion and empowerment at Conference 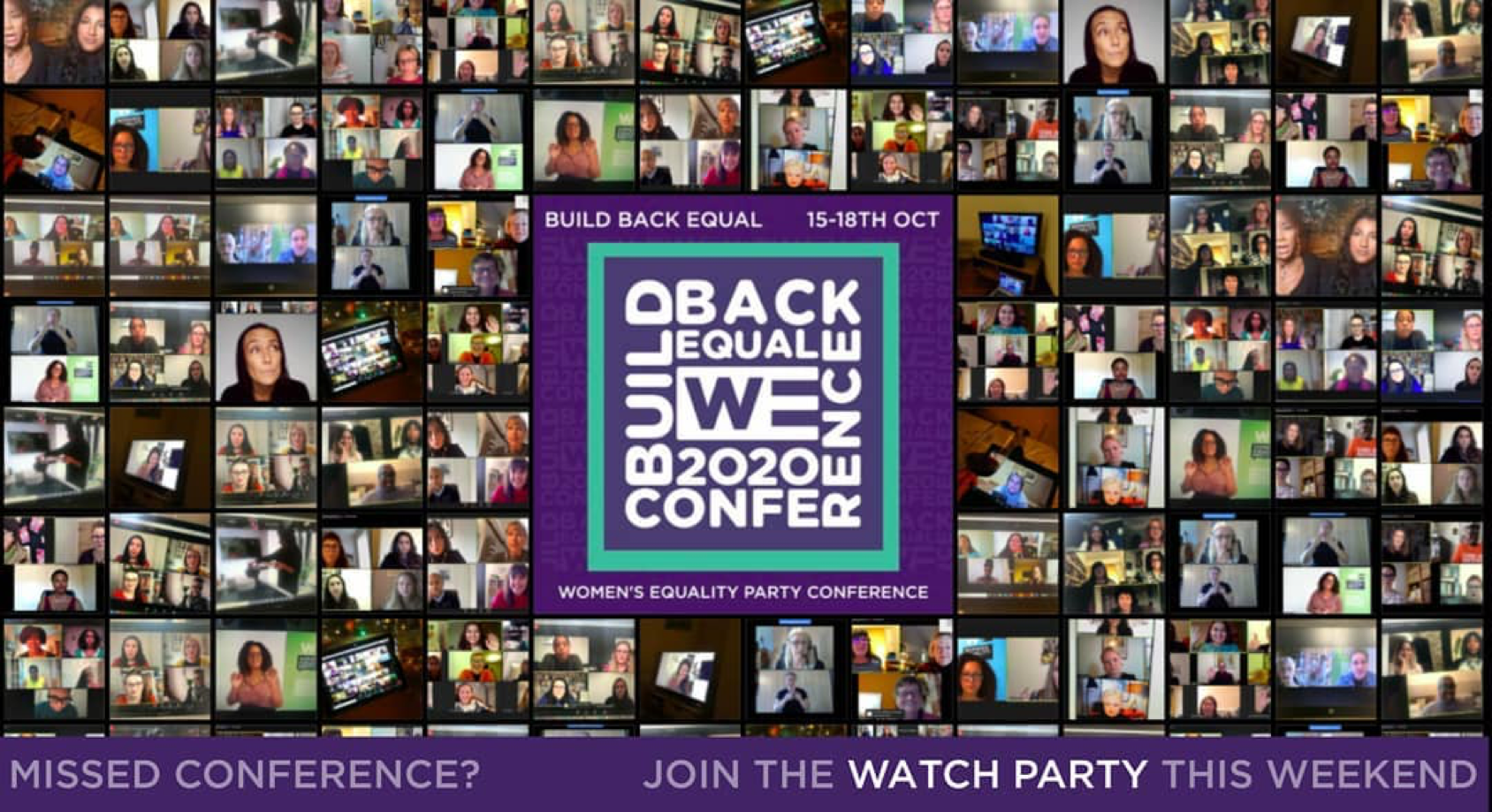 With face-to-face gatherings off the cards, the third Women’s Equality Party Conference faced a new challenge. But like every other obstacle 2020 has thrown our way, we weren’t about to let that stop us. Attendees came together virtually, using an app to access the all-singing, all-dancing conference experience completely remotely. From 15th to 18th of October, ticket holders joined Zoom sessions, watched webinars, giggled at comedy sessions, voted on motions and looked on as a vibrant range of speakers poured their hearts out on screen.

This year’s theme was Build Back Equal. It was a shift of perspective on ‘Build Back Better’ – a phrase embedded in 2020’s lexicon, often used to reference economic recovery and championed by UK non-profit, Green New Deal UK. But being part of WEP means acknowledging that improvement is futile without equal footing to begin with. Growth, be it economic, social, cultural or otherwise, means little if it comes from a place of injustice – and that’s what Conference boldly endeavoured to take on.

At a time when so many of us feel starved of connection and community, the four days went some way to conjure that sense of togetherness. Conversations blossomed, supportive comments piled up, and while physical closeness was missing, that galvanising empowerment of Conference wasn’t hard to tap into. This – as Chief of Staff, Hannah Peaker so rightly asserted – was to be the beating heart of the party. Time to forge a new consensus about our future – to take on the challenge of rebuilding, remodelling and reimagining a world in which systems work to champion the rights of women. It was never going to be easy, but with 60 speakers and over 1,000 feminists logged in and fired up to take on the future together, we were ready to give it a damn good go.

The programme opened with a look back at the progress and achievements of our party over the last two years, with the first day featuring everything from Cynthia Enloe’s pioneering feminist critique of militarizing Covid-19, to cocktail making in the name of the late, great Ruth Bader Ginsburg. We witnessed Mandu Reid’s first ever leadership speech and learnt that real change begins with building new economic systems that work for women. We witnessed an earth-shattering spoken word performance from Miss Yankey and Yasmin Ali, and heard powerful insights on how we can stop so many Black women dying in childbirth.

This year’s Conference headliner was prolific feminist writer and activist, Laura Bates. As founder of the ground-breaking Everyday Sexism Project, she’s done critical work in the name of uncovering the unspoken depths of misogyny in the UK and beyond. She joined Mandu on Saturday evening to talk about the subject of her new book, Men Who Hate Women. The discussion delivered a chilling glimpse into a dangerous online world where this kind of hatred can flourish.

To write the book, Laura went undercover. Posing as ‘Alex’, a young man searching the internet for answers, she was able to enter subreddits and forums where toxic misogyny is rife. 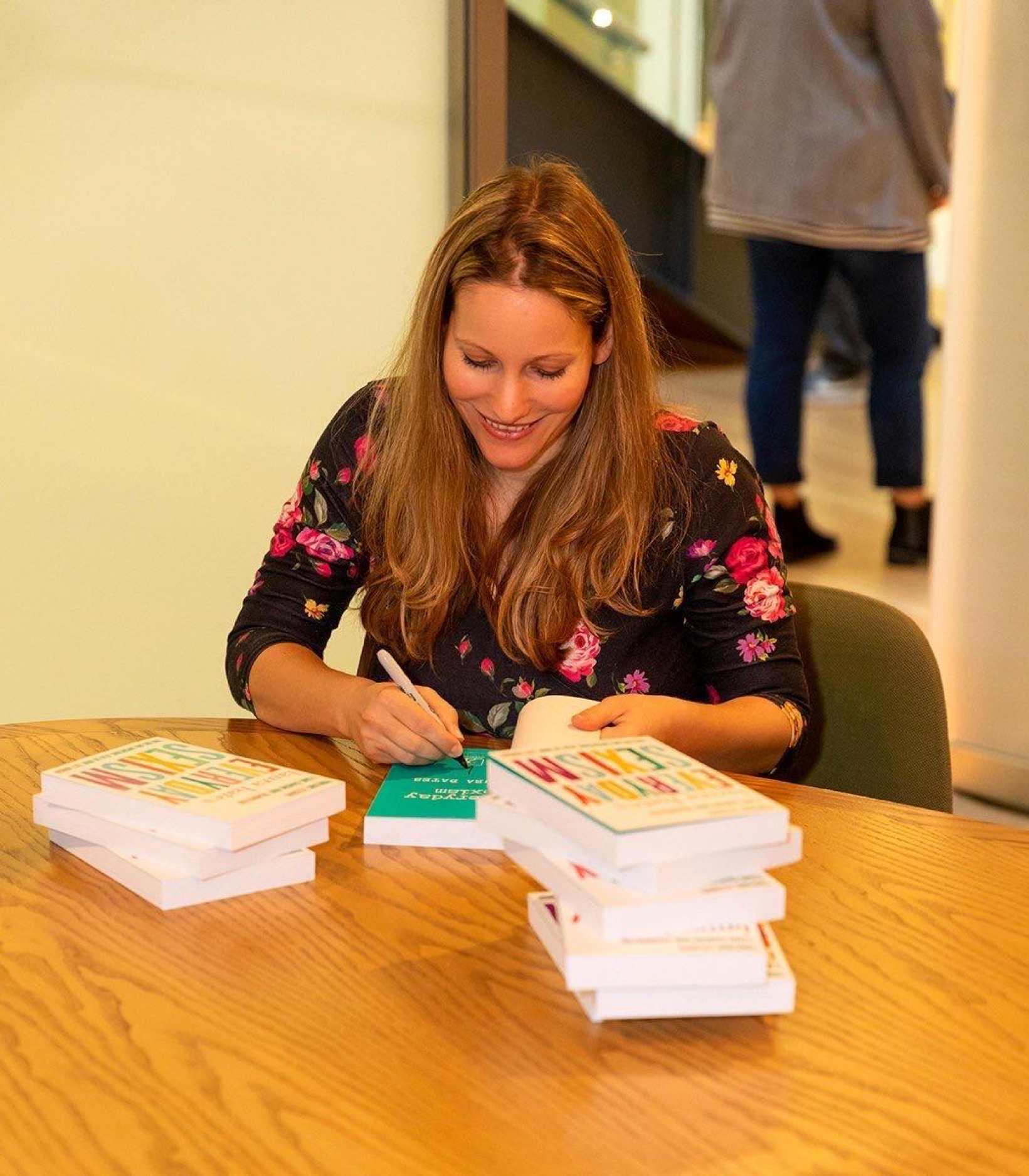 She was shocked by the violence and language she encountered, but what spurred her to begin writing was her experience in schools. Travelling to classrooms around the country, Laura discovered young boys repeating the same sets of wrong statistics and skewed claims about feminism, rape allegations and white male victimhood. She spoke of the kind of radicalisation that would be cast out immediately under any other belief system, highlighting the link between anti-feminist forums and white supremacist grooming.

“Over half of mass shooters actually kill a family member during their killing spree, and two thirds have a history of stalking or harassing women,” she said, highlighting the female victims whose lives could be saved by better education and legislation. But, as with any issue of gender injustice, it’s not just women who suffer. “The greatest irony of the ‘manosphere’ is that [it] claim[s] to fight for men who experience real issues like mental health or sexual violence, but ironically they absolutely double down on the kind of constraining stereotypes that underpin those issues,” said Laura. A bleak reminder of the dually toxic nature of this type of discrimination – especially when it exists inside a system where women are already underrepresented and marginalised.

Through it all, the conversation between Laura and Mandu was balanced and honest – a frank discussion of a highly emotive and triggering topic conducted in a refreshingly respectful way. At one point, Mandu shared some of the story behind her motion (which would be debated the following day) on affirmative consent, and her courage in speaking about such a personal yet, sadly for many women, familiar experience brought a level of emotional clarity and weight to the session.

This is the beauty of Conference and the speakers and participants who come together to make it the impactful congregation that it is. Through every difficult conversation and chilling statistic, the sense of solidarity strengthened. Laura’s findings and the truths they uncover are frightening and uncomfortable, but their importance and her courage in speaking out is clear. It’s time for change in so many areas – hidden online misogyny and radicalisation starkly being one them. But with calm, intelligent yet unrelenting voices like Laura’s, like Mandu’s, like so many of those we heard across the weekend, we continue our journey. This is how we Build Back Equal, and the story’s only just begun.