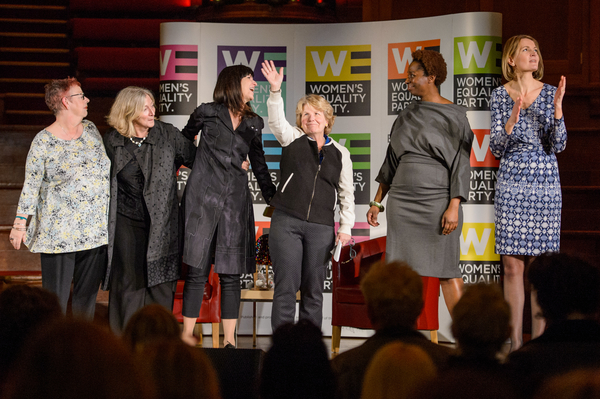 Last night Caitlin Moran, Jo Brand and Tanya Moodie joined Sandi Toksvig, Catherine Mayer and Sophie Walker of the Women’s Equality Party (WE) to launch the Party’s election campaign for the May elections.

“Now is the time to put our heads above the parapet,” said Ms Toskvig, who co-founded the party with Mayer in March 2015, told the 2000-strong audience. “Let’s do it for our daughters and our sons. Join me at the barricades.”

Toksvig called for those new to the Party to join there and then. “If you become a member before 28 January, you are eligible to vote for who our candidates will be in the elections to the London Mayoral, London and Welsh Assemblies and Scottish Parliament elections in May,” she said. “Be part of our new politics. And if you’re already a member: enlist someone else.”

Co-founder Mayer added: “WE need money not just to campaign, but to create bursaries and pay for childcare for our candidates.

“WE are the only political party that just wants to get the job done, then pack up and go home.”

WE have six key policy goals – equal pay, parenting, education, opportunity in business and politics, equality in the media and an end to violence against women.

Alongside Mayer and Toksvig, Jo Brand and Rosie Boycott spoke about media misogyny, following WE party leader Sophie Walker’s onstage interview with actor Tanya Moodie about intersectionality, and the importance of having people in power who look and sound like you.

“It’s been a tremendous night, and we are thrilled to see so many people here who are desperate for change,” said Walker. “WE will be on the ballot paper in May 2016, and WE will win seats.”

Caitlin Moran, who also spoke at the fundraising event at Central Westminster Hall, was clear that the new politics WE represents was necessary, and urgent. “Every woman here is the incremental undoing of a fundamental wrong that has limited women and made them unequal,” she said. “We have the ability to something remarkable and extraordinary together – WE can make that happen.”