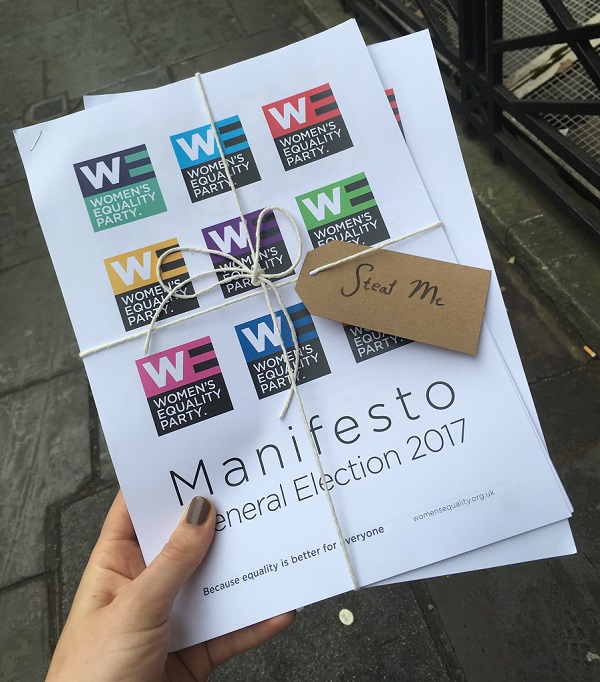 Labour and the Liberal Democrats have once again failed to prioritise women in setting out their manifesto commitments the leader of the Women’s Equality Party said on Wednesday. Both of the parties have gone further than before, in an effort to win back Women’s Equality Party voters, but they have failed to understand the scale of the opportunity.

“WE couldn’t have made it any easier for them - last week the Women’s Equality Party hand-delivered our manifestos to all of the other major parties with an open offer to steal our bold (and costed) plans for free childcare and truly shared parental leave. WE have certainly put an end to pink buses and “women’s manifestos” but the old parties continue to underestimate the scale of the opportunity in equality,” said Sophie Walker

“WE offered these plans in the same spirit that WE always seek to work collaboratively: because it’s urgent now that we take action to provide equal access to work and jobs, close the gender pay gap and drive UK productivity. Labour and the Lib Dems have shown in their election plans a disappointing lack of vision for the women of this country and one that looks surprisingly similar to our policies of two years ago.”

The Women’s Equality Party’s plans for a new system of parental leave would give both parents three months leave each on 90% of pay with additional three months to be split however they choose. This would be funded by a small levy on employers which would form a fund covering shared parental leave payments, protecting employers from unexpected costs and levelling the playing field for women and men at work and at home.

The party is also offering free, universal childcare amounting to 40 hours per week, 48 weeks a year from the end of parental leave to school age.

“Labour’s pledge to extend the current 30-hours offer on childcare is heavily underfunded and states only that it will ‘move towards’ making ‘some’ childcare available for one-year-olds. This falls far short of our offer,” said Walker. “The Liberal Democrats’ 15 hours free childcare promise will not enable the hundreds of thousands of mothers who who want to work to get back to their jobs. Both parties would fail to close the gaps that force so many women out of work.”

She continued: “The Labour Party has pledged to double statutory paternity pay, but this would still be a level far too low for most dads to afford to take time off work. The Lib Dems have taken our advice on ensuring a use-it-or-lose-it proportion for fathers, but only for one month. Our plans go much, much further - and at a time when we are looking at an uncertain Brexit future, innovation and investment  is needed more than ever,” said Walker.

Walker also criticised Labour and the Lib Dems for failing to respond to the alarming funding crisis that is forcing the closure of refuges for survivors of domestic violence, even as reporting rates rise,  and hammering other specialist services that support survivors of sexual violence.

“Two women a week are killed by their partner and one in four women experience domestic violence. Yet women are being denied services to rebuild their lives,” she said. “It is frankly astonishing that the Liberal Democrats do not have a single word in their manifesto about violence against women, the most pervasive human rights violation of our times.”

“But Labour too fails to offer tangible solutions. Competitive tendering that has so shattered the landscape of women’s organisations has done enough damage.WE are proposing a grant model that will ensure the sustainability of the services, particularly services for BAME women and disabled women that are closing at a disproportionately higher rate.”