Grab equality by the balls

Grab equality by the balls

Let’s start with a story:

During the First World War, women worked in munitions factories. During their breaks they started to kick a ball around. They very quickly organised themselves into football teams; factory teams playing other factory teams. Teams even started touring. By the time the men returned from war, the women's games were attracting crowds in their 10,000s: more than the men’s. Then, in 1921, the FA banned women’s football. Yes, you did read that correctly. They banned women from playing on FA pitches, or working with FA coaches and redirected sponsorship to the men’s game. And they didn’t lift the ban until 1971, killing the game for 50 years.

Lewes Football Club launched a ground-breaking campaign. Equality FC aims to level the playing field for women and we were delighted to welcome Karen Dobres (Campaign Manager) and Katie Rood (Lewes FC Player) to tell us more! Lewes FC is the only club in the world to pay the women’s team the same as it’s men’s team.

Karen began by telling us that sexism in football is so ‘normal’ and hard to notice that any deviation from the norm tends to make news. With most other football clubs (obviously unlike their male counterparts), semi pro or non league female players don’t get paid to play and they have to pay for travel, training, uniform etc. Even those in the highest league get paid in a year what their male counterparts get paid in a week. Unlike most other football clubs too, both male and female teams play at the Lewes FC grounds. Arsenal Women do not play at the Emirates Stadium but in Borehamwood. A much harder location for fans to reach.

As Lewes FC is 100% community owned (now with 5 more additional ‘club owners’ from the Southwark branch!) they are led not purely by profits but by creating value in the wider sporting community. For example, they have written an open letter to The FA, questioning the gender - based difference in the FA Prize Cup. Their match posters also come with a message: they feature inspirational women from the away team’s locale. This is about respecting and sharing an understanding of the challenges faced by the opponents too. 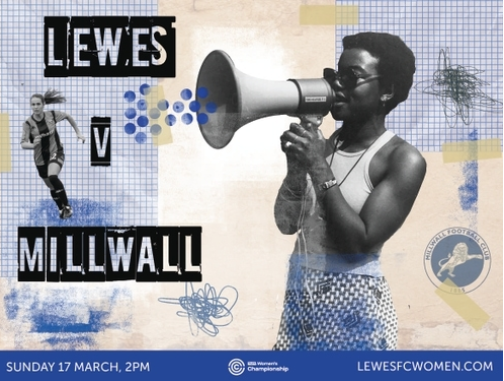 Lewes FC thus has the freedom and the desire to question why female players are paid less. At the time, the women’s matches were attracting crowds a third of the size of the men’s teams. Therefore sponsors were willing to pay less as they’d be reaching a smaller audience. This of course makes sense. But Lewes FC went further … and questioned why the smaller audience.

The story at the start should give some helpful context. Since the 70s men’s football has monopolised interest and attention. From then on it was seen only as a men’s sport. Given the history, Karen “can’t see why the women’s game shouldn’t become as popular as the men’s.”

Karen tell us that Lewes FC Ladies are strong, agile and determined and here in the UK are playing in the second highest league. She also tells us about when she went to watch her first women’s football match at Lewes:

Society and the media tells us that women and girls can’t be strong and men and boys can’t be vulnerable. So, it’s important that little girls see this sport as a viable option for them and little boys see it as an obvious option for girls, too.

There is also an economic reason for supporting more equality in football: diversification! Commercially, it’s beneficial to make sure both ‘products’ are given equal resources and opportunities to thrive. This has proven a clear opportunity to generate incremental revenue, by giving equal support to women’s football. For example, the Equality FC Campaign has actually generated commercial interest in the whole club.

Katie then shared her journey to Lewes FC with us, reflecting further on the challenges she’s faced after hearing Karen’s talk. It’s clear that for Katie and many of us, sexism creates obstacles that often we’re not even aware of. As a child who was always interested in sport, she tells us that assumptions were always made that she’d never be as quick or strong as her male counterparts. With netball being the main sport offered to her throughout her education, she found it to be restrictive of her movement. She tells us that everything she was interested in never fitted the social normal of being a girl but when she cut her hair and played with the boys she got called a boy - which still didn’t feel right. Femininity is such an integral part of female socialisation that it’s easy to see how this can occur for young girls.

When Katie got the opportunity to come to the UK to play football as a semi professional, she was paid nothing the whole season. Only the top 1% of female footballers are paid well; the rest, like Katie, had to have a 9-5 job too. So, money ran out and she went back to New Zealand, where she grew up and where again, she was expected to train full time but still had to find time for work and education. She soon discovered the rising tide of media around women’s football which included documentaries about ‘the 99ers’. When the US International Ladies team won the world cup in 1995 and were greeted with virtually no support, they took on the mission of generating national excitement and enthusiasm for the sport ahead of the World Cup four years on. Going to Juventus, then to Bristol before coming on loan to Lewes - she tells us about her hope to inspire a new generation of girls into the sport, so they don’t have to face the same challenges she did.

So, what can we all do to help Equality FC in their mission?

To conclude, in Karen’s own words: