From our Candidate, Leisa Taylor -

So, supporters, we’re on the final leg of our first election race. I’d hoped to do a blog each week but the election demands kept getting in the way. Fortunately we’ve had some amazing people running alongside us helping to keep the flow and give you an insight from different perspectives.

Here’s a few thoughts from me, as candidate. 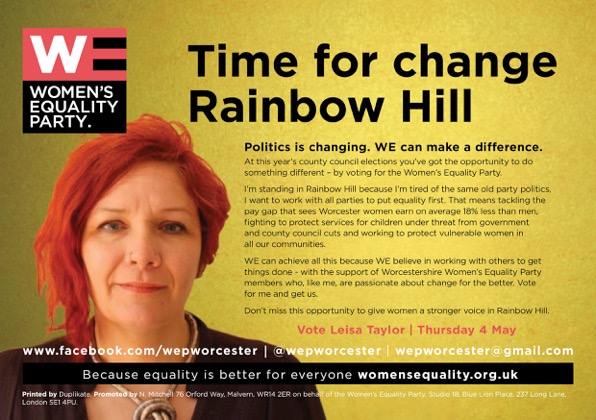 Having had been given the mandate to represent WEP at local level I’ve felt an enormous sense of pride and responsibility in carrying out the job. And I have to admit to a few occasions of wanting to switch off, unplug, draw the curtains and close my eyes and ears. However, those moments have been overshadowed by amazing conversations, meeting fantastic people, and an overwhelming sense that as the Women’s Equality Party we have a real opportunity to make a difference to people’s lives.

Sometimes it’s been the little things - the male chair of a hustings apologising when I challenged him after he referred to a female councillor as another councillor’s wife; receiving an email from the incumbent who signed off, in brackets, ‘brother to 3 sisters, father to 3 daughters, reader of Spare Rib…..’; smiles of appreciation from fathers on the doorstep when you acknowledge the great job that they are doing; counting the number of households who have now heard of the WEP; the parents who sat and explained to their children what I was doing, what WEP represents and why; the young woman who ran across the street to whoop when she saw Amy Killen’s WEP T-Shirt; the email from a person who had been leafleted asking to know more about the ‘shocking’ pay gap; the Facebook comment from a supporter saying they were moving to Rainbow Hill so they could vote for us (they weren’t obviously, but we appreciated the sentiment); the private message from a Green supporter to say, ‘I hope once all this has calmed down after the election and you get a chance to breathe, that you see how much you've done for us all, cross-party and cross-nation’.

But actually these aren’t the little things because it’s these little things added up that make the big differences in the long run, after all the personal is political is personal. 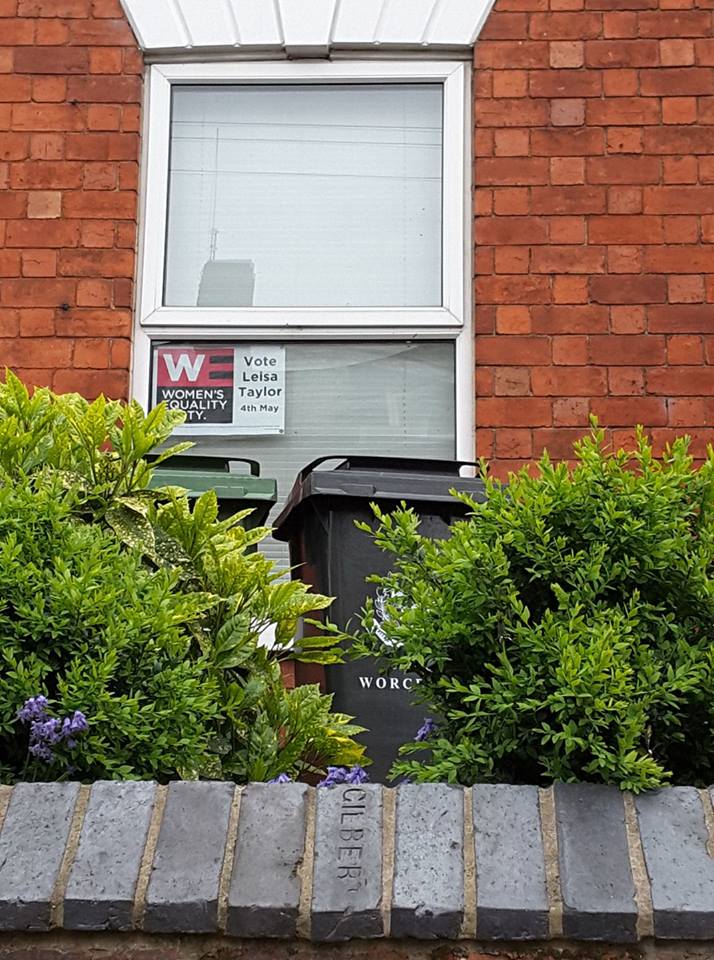 Canvassing has been such a great experience for us as a branch and for me personally. When we first agreed we’d stand a candidate in these elections two of my main aims was to mobilise our members and supporters to get out there and start talking to people to deliver our message to the local community. If for no other reasons this experience has definitely been successful and worthwhile in achieving those aims.

Personally it’s been great to feel my own confidence and resolve grow with each doorstep conversation, to discover that even when you know that person already has another political allegiance that they are still interested and supportive of our aims. It’s been amazing to see the confidence of our canvassers grow too, to see each trepid volunteer suddenly find their voice and turn into amazing advocates and activists to the cause. Amazing. And great respect to our resilient and relentless leafleteers - who knew that letter boxes could be such a challenge?

But the really wonderful thing about canvassing has been the conversations. It’s true that most doors remain shut when you’re knocking on them, and many have ‘No Cold Caller’ signs clearly displayed, or people open the door and very quickly try to get rid of you (generally politely) - this can be a bit soul destroying and then someone opens the door and before you know it you’re engaged in a really interesting conversation about women’s equality, divisive politics, local issues, people’s lives. And you realise that this is the purpose of the politician, regardless of your political leanings - be that at local or national level - to listen and to represent the voices of the communities that you serve.

And though I really don’t expect to win the seat, or even gain many votes, I know that I have reminded the people we’ve spoken to that they deserve to be listened to, that every voice should count, that there is another way to do politics and, of course, that women’s equality is better for everyone.

The next five days are going to be busy. We have a comms plan to deliver; another hustings to promote, host and take part in; more canvassing and leafleting until the 11th hour; hopefully some local media interest to indulge and finally a vote to count. Wish us luck and thanks for supporting us this far, it’s meant so much and kept us going.