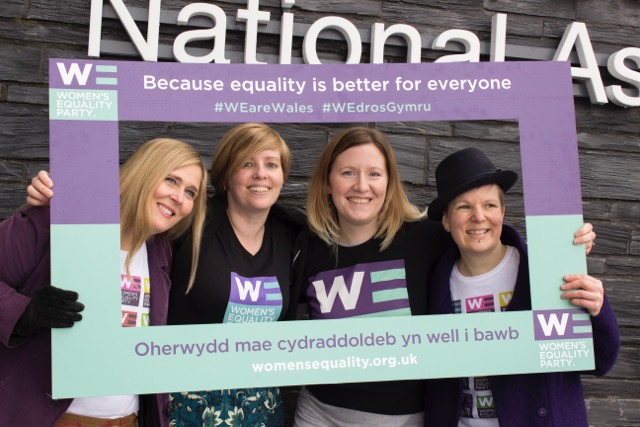 WE launch our Wales manifesto

WE launch our Wales manifesto

Men and women from across Wales gathered on the steps of the Welsh Assembly to celebrate the launch of the Women’s Equality Party manifesto in Wales. The manifesto is available in Welsh and English.

“WE are fielding four candidates in South Wales Central,” said candidate Sarah Rees from Penarth. “Our manifesto details how WE will work with parties across the political spectrum to achieve our goals.”

The manifesto’s focus is on putting gender at the heart of all Assembly decisions, implementing gender mainstreaming across all boards and organisations under the Welsh Assembly.

Rees continued: “WE are not willing to wait another hundred years for gender equality. The time has come to correct the gender imbalance once and for all, and to make Wales the first country in the world where all genders are equal. WE want more for the people of Wales – equality should never be a footnote or an afterthought.”

Sharon Lovell, WE candidate from Cardiff, urged people to use their second vote for the Women’s Equality Party in Wales.

“It was lovely to see so many people turn out to support our manifesto launch,” she said. “They recognise that equality for women isn’t just a women’s issue. We’re asking people to use their second vote for us on 5 May. Pick our party and make sure you help put gender at the heart of government.”

Sarah Rees from Penarth runs a small social enterprise based in Cardiff. She has a two-year-old daughter and this is the first time she has been a member of a political party.

Sharon Lovell from Cardiff is Director for Nyas, a UK charity providing information, advice, advocacy and legal representation to children, young people and vulnerable adults. Sharon has never been a member of a political party before because she never felt that a political party represented her.

Emma Rose, born in Wales and studied at Cardiff University, is a single mother of two children and an assistant headteacher.

Click here to read our full manifesto for Wales