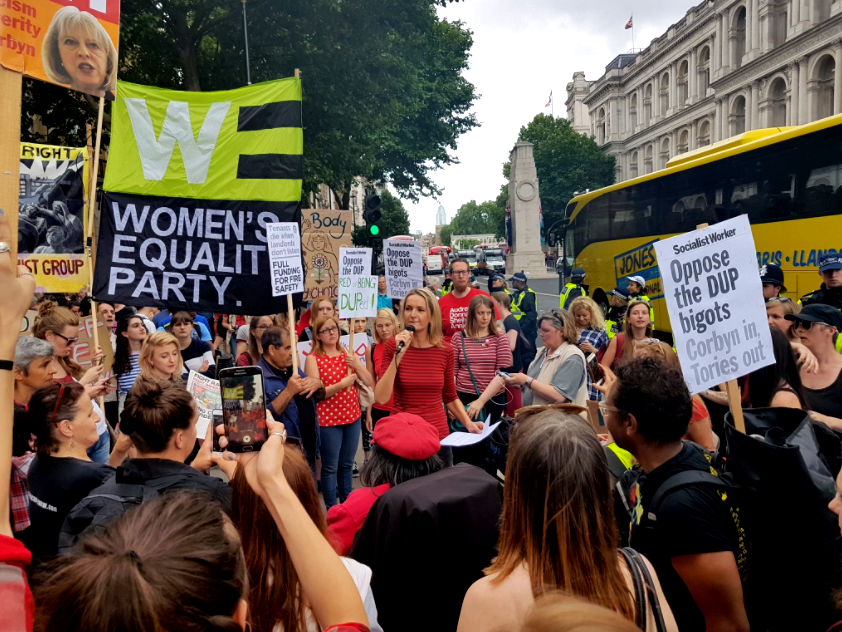 Our response to the deal between the Conservatives and the DUP

The Women’s Equality Party today warned human rights were at risk with the news that the Conservative Party have made a ‘confidence and supply deal’ with Northern Ireland’s Democratic Unionist Party.

The deal will see the DUP's 10 MPs backing Theresa May’s minority government in key votes in the House of Commons, although there will be no formal coalition.

“Today is a new low for democracy and human rights in the UK,” said Women’s Equality Party leader Sophie Walker. “The DUP was not on the ticket at the last General Election in Scotland, England and Wales and neither were their regressive policies. It is deeply worrying that Theresa May has made a deal with a party that seeks to deny women autonomy over their own bodies, to deny the rights of the LGBT community, and which counts among its senior membership climate change deniers and believers of creationism..”

“We will resist any attempt to curtail equal rights and opportunities for women under this regressive alliance,” Walker said, adding the deal would mean continued silence from the government on women’s reproductive rights across the UK, including those of women from Northern Ireland.

“This is not only an issue for the hundreds of women that have to travel from Northern Ireland every year in order to seek a safe abortion – it also affects women across England, Scotland and Wales, where abortion is still to be decriminalised. With the government dependant on DUP support for passing new legislation, there is no chance that progressive policy to right this antiquated and dangerous wrong will go ahead.”

She added: “Women’s bodies are always the first chip to be bargained, and today’s deal shows that Theresa May and her government put women’s rights and human rights far down their list of priorities. We will fight every step of the way during this precarious term of Parliament to ensure all women in the UK have autonomy over their bodies, and that equality is a right that all can expect.”